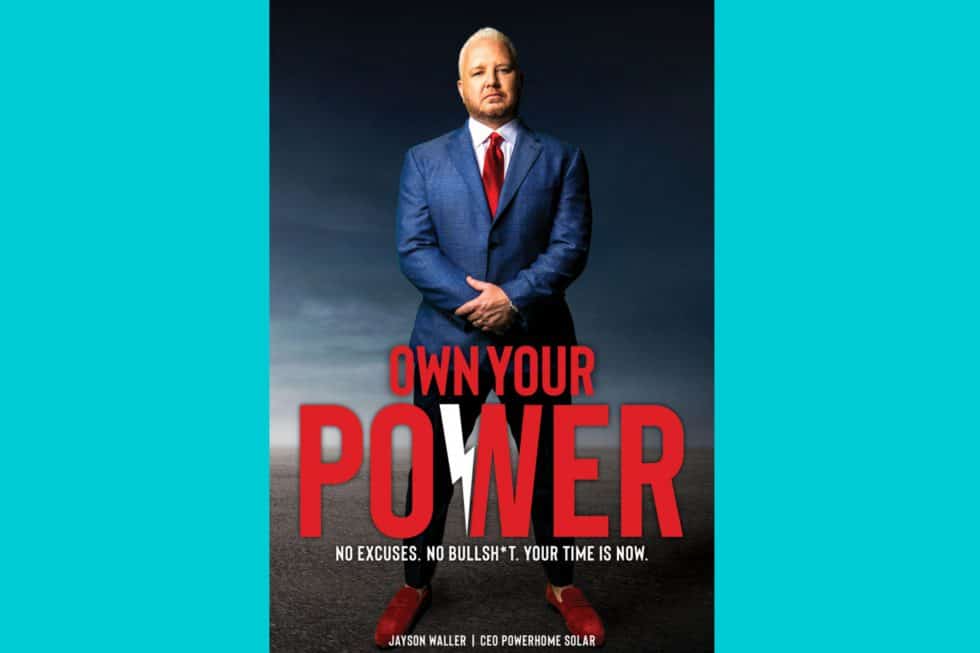 Own Your Power was a Wallstreet Journal Bestseller, #1 Amazon Bestseller and a USA Today Bestseller

Chapter 1: Make Your Own Map

The night I won the 2019 Ernst & Young Emerging Entrepreneur of the Year Award, I had a “how the fuck did I get here?” moment.

It was long after midnight. Liz and I had been partying late with a bunch of famous business people and millionaires. Now we were back at the Omni hotel at The Battery Atlanta where we’d been put up in an executive suite with a balcony that looked onto the field where the Atlanta Braves play. I turned out the lights, lay down, and thought: Wow, that was a cool day.

Then I flashbacked to where I’d come from. I rewound the journey I’d been on to get to this day. For a moment, I was eighteen-years old again, back at University Hospital staring at nine babies, not knowing which was mine. That was the day my daughter Hannah was born.

Two lives started the day my first born came into the world. One was hers. The other was my rebirth.

I didn’t know it that day, but everything was about to change. I wanted to see my baby girl so badly, but I wasn’t allowed to.

I stood in front of the admissions nurse at the front counter of the birth unit at University Hospital where I had rolled up with my buddy Ben.

“Excuse me. I’m here to see Elizabeth Stalvey,” I said to the nurse.

She scanned her list. “There’s no one here by that name,” she said.

We were two 18-year old kids pretending to be men. The fact that I needed a sidekick was an obvious tell. My First Union sales rep shirt didn’t make me any more adult either. To the nurse, we were two little boys playing dress-up.

“Ah…yeah, there is,” I said. “Liz is here now…she was induced…she’s having our baby today…her mom and sister’s cars are in the parking lot…I just saw them.”

The nurse checked her list again. “No. There’s no one here with that name. Sorry.” She didn’t really look sorry.

Liz’s mom made her use an alias at the hospital because she didn’t want me there. I was a high school dropout, the trailer park kid that knocked up her 17-year old daughter.

The entire time Liz was pregnant, her mom tried to get us to abort Hannah or give her up for adoption. We fought Liz’s mom hard, and just long enough that that wasn’t an option. She retaliated by admitting Liz to a maternity home, which is a residential facility where women go to have babies, and often so it’s kept a secret.

I had to break Liz out of that place. One night a buddy and I drove up to the side of the building with the window to her dorm room. Moments later, a 7-month pregnant Liz slid a panel of glass open and popped the screen out with a pair of tweezers. One step at a time, she descended two flights of a shaky fire escape. Then, we put her in my car and drove away.

So the fact we’d even made it to this day at the hospital was a damn miracle.

“Are you serious? I can’t see my kid being born?” I said to the nurse.

The best she could do was direct Ben and I to the visitation area to see all the babies in the maternity ward. This was in 1998, so these were the days before protection laws. Anyone was allowed to view the latest batch of newly baked newborns through a glass window. We didn’t know which baby was which, but we could go see them.

So we took the elevator up one level. I had a bulky Polaroid camera around my neck, which I wore like a rapper’s neck bling. I was pretty proud of it. I’d saved up for seven months to buy it so I could use it specifically for this day. I had imagined handing it to Ben, and—click—having him capture the first moments of me holding my little girl.

The gadget was also a badge of progress. Evidence I was doing okay in life now. Sure, I’d dropped out of school, but I also landed a First Union sales job. I’d moved out of my parent’s trailer. I had an apartment of my own. Once I was a dad, I figured I would get a lot of use out of my new toy. Life would finally be good enough for taking pictures.

But standing there snapping photos of nine unknown newborns, I questioned my purchase for the first time. This camera was supposed to be for capturing the first photo of my baby—not a group shot of her and her eight new cooing buddies.

Later that night, Ben and I sat with my parents around their kitchen table. We searched the baby faces in the photos looking for traces of me. One by one, we tried to figure out which baby was mine.

That was one of the best days of my life. It was one of the worst too.  I cried my ass off right there at my parent’s kitchen table. No more trying to be a grown-ass man. I was a hot fucking mess. I snapped. But in the right kind of way, because I also woke up.

I hit an emotional breaking point. I was sick of being denied what I wanted in life. The story that I could never get what I wanted had gotten old. So I drew my own damn start line and walked across it. Everything must change. I’m on a mission now. I can’t fail. Game. On.

The shift I went through that day forever molded my approach to life, and it persists to this day. My mantra now is: Every day’s a playoff game.

Fast forward two decades and I am married to Liz. We have four great kids. I’m a grandfather because Hannah has her own children now. Yes, Grandpa Jayson at your service. But I still have flashbacks about that day. Maybe a little lingering PTSD at times.

The one thing that hasn’t changed is that I still only play to win. By the end of this book, if I have my way, you will start operating as if every day is a playoff game too. And better, you won’t have to go through the kind of shit I did to start thinking this way. So let’s start by figuring out what story is keeping you from making a map and following it.

The beginnings of the Make Your Own Map philosophy took shape in the early days of my life, back before I even knew what to call it. Back when my own stories about my life ran the show.

We all have stories that we use to rationalize why we’re the underdog. When life doesn’t turn out the way you want, there’s probably some crap story you cling to in order to rationalize it.

You’re too old. Or too young. Or you didn’t go to school. Or you don’t have enough money to start that business. Or your front teeth are too crooked. Even people who seem to have it good have a story—maybe you were born privileged and have money, but no life skills.

The circumstances don’t matter. The story is what holds us back.

I know this now, but didn’t when I was a kid. My parents did their best, but we didn’t have a lot of money growing up. I had a lot of, “Wow. What would that be like?” moments. Others always had what I didn’t.

Even though I was a trailer park kid with knockoff clothes, it wasn’t all bad. Every summer, my parents took me and my two siblings, Jeremy and Jessi, to Disneyland. It was the only trip we took each year. And they saved all their money for it. We lived in Phoenix, Arizona until I was 14-years old. Our family couldn’t afford to fly to Disney so we drove to California, usually, in a car that didn’t have air conditioning.

Most of the trip’s budget was spent on the tickets that got us into the park. The rest of the dollars my parents had saved were carefully rationed in order to make them last. Each penny was allocated for basic survival expenses to make the trip happen. There was the cost of gas to get us between the colored gates of the park and our shoddy motel room (not a hotel, there’s a difference) with wall-to-wall wood paneling and pilled floral bedding that you didn’t really want to sleep in.

The one-star experience that supported our time at the park didn’t stop us. The whole family loved our Disney trips.

We’d go early, stand in horribly long lines with ear-to-ear grins plastered to our faces. We’d alternate screaming and laughing on all the rides. We were like the idyllic, way-too-happy families from the Disneyland commercials, all hands in the air on the roller-coasters, lots of Mickey Mouse high fives, and wide-eyed happiness in all the theme park madness. Is it truly “the happiest place on earth”? I certainly thought so.

Each afternoon, we put the fun on pause to hike back to the motel. My mom made peanut butter and strawberry jelly, or bologna and mustard sandwiches, with all the house-brand ingredients tucked into a Dempster cooler. We’d chow them down, slurp back our one rationed can of soda each, then head back.

Somewhere between the minivan and the line for rides, I could see a future where I was in control. Where I could buy the snacks at the park if I wanted to and stay in an actual hotel. I started to see life as a map with places I knew I wanted to avoid and other places I wanted to travel to.

Eventually, I realized I was the driver of the car following the map too. And over time, I got tired of driving the rutted roads—or worse, being driven by someone else down dusty routes. I wanted control. You can only take shit for so long. The day Hannah arrived was a departure point for me. It was my turn to drive.

But you can live life like every day is a playoff game, no matter who you are or where you came from. You don’t have to have an unplanned kid or a trailer park existence or a one-star Disneyland childhood.

You make your own map in life, and you can start any time.